From the passenger perspective. The plane takes off, and as you pass through 10,000 feet, which is the end of sterile cockpit, you hear a chime. Shortly afterward, a flight attendant makes an announcement telling you it’s okay to turn on your portable electronic devices and may remind you that the seatbelt sign is still on. You reach cruise flight, then ding! The fastest seatbelt sign is turned off and you are free to move around. The flight attendant or flight crewmember makes the regulatory required announcement per 14 CFR 121.571 that passengers should keep their seat belts fastened, while seated, even when the seat belt sign is off.  Throughout the cabin, you hear numerous click sounds of people unfastening their seatbelt, although when seated you should keep your seatbelt fastened in case unexpected turbulence is encountered.

Invariably, at some point, the seatbelt sign does get turned on. You hear over the PA system the announcement for everyone to return to their seats and fasten your seatbelts. Without fail, someone does get up after the announcement is made and heads to the bathroom. So, you begin to think … am I required to remain seated with my seatbelt fastened? Do I really have to pay attention to that illuminated sign? If I get up and get hurt, am I responsible for my own safety, or is the airline still responsible? After all, when nature calls, I have to answer. Either I get to go use the lavatory, or something worse might happen.

Depending on the size of the plane and the level of turbulence being experienced, the flight through the air in the front of the plane may feel relatively smooth or slightly bumpy, while the rear of the plane is being bounced around. This difference in cabin conditions is particularly noticeable on very large aircraft, such as a Boeing 747, 777, or an Airbus 380. The difference in cabin conditions may lead passengers in the front of the plane to think it is okay to get up and walk in the cabin. When the seatbelt sign is on, it applies to everyone throughout the aircraft, regardless of how smooth the flight may or may not be in their section.

14 CFR §121.317 Passenger information requirements, smoking prohibitions, and additional seat belt requirements. So, what does the regulation say? It says:

Are flight attendants the seatbelt police? No, flight attendants are not seatbelt police, yet they are safety professionals who have gone through extensive training prior to becoming a flight attendant, and their primary purpose on board an airplane is for passenger safety. Seldom is this recognized as you typically see them as being on board for service. When the seatbelt sign comes on and they remind you of this and they possibly check on you, they are doing it in the interest of passenger safety. The flight attendants’ job is to inform the passengers when they need to be seated and buckled up. In a worst-case scenario, a passenger who does not put on the seatbelt may find themselves tossed about the cabin like a ragdoll should you encounter severe turbulence. Both passengers and crew members have been badly hurt and sometimes hospitalized due to severe turbulence there’ve even been passengers who have had their neck broken because they were not wearing their seatbelt. Don’t become a statistic – fasten your seatbelt whenever seated.

There have been unfortunate incidents of severe turbulence where flight attendants and passengers were injured from being tossed in the plane. When you fly through turbulence, there is always a risk that the intensity may increase. Sometimes severe turbulence can and has occurred without any warning. Flying is very safe, and part of passenger safety includes wearing your seatbelt whenever seated. Look at the following articles and you will see what is happened to the passenger cabin when turbulence unexpectedly occurred.

CNET.com – This is what happens when severe turbulence hits a plane

There is no shortage of information about incidents where passengers were injured during severe turbulence. Weather is a component of air travel and turbulent air cannot be completely avoided. Most turbulence can be either predicted or have its presence known through pilot reports who flew through the turbulent areas. Sometimes when turbulence is known in a particular area, the pilots will ask if the ride is any smoother above or below that particular flight level and change altitude if reports indicate changing the flight level will provide a smoother ride. There are times there isn’t much that can be done to avoid the turbulence because of air traffic in the area and the need to maintain separation of aircraft.

Let’s go back to passengers using the lavatory when the seatbelt sign is on. Can you, a passenger, use the lavatory onboard the airplane when the fasten seatbelt sign is on? A definitive answer can’t be given. The captain made the decision to turn on the fasten seatbelt sign. An announcement was made to inform you to remain seated. Flight attendants may have checked on you to ensure your seatbelt is fastened, yet you get up. They will remind you again that the seatbelt sign is on and that you should be seated. The flight attendant’s job is to inform you, you are responsible for following their instructions. Should you get hurt from being out of your seat during turbulence and decide the airline is responsible for your injuries, you will likely have a hard time making your case considering you were informed multiple times to remain seated. Flight attendants are not the sky police and they won’t/can’t arrest anyone for not putting on their seatbelt. Just remember, while the flight attendants are not sky police, they are informing passengers in accordance with 14 CFR 121.317(f) that they need to comply with the illuminated fasten seatbelt sign.  The regulation says, “(f) Each passenger required by §121.311(b) to occupy a seat or berth shall fasten his or her safety belt about him or her and keep it fastened while the “Fasten Seat Belt” sign is lighted.” However, the person who does not fasten their seatbelt or moves about the cabin to use the lavatory is putting their own well-being at risk, as well as the safety of all other passengers nearby. Should moderate or greater turbulence be experienced you become a large object that can bump into or fall onto another passenger.

The seatbelt sign is turned on for your safety; always buckle up and remain seated. 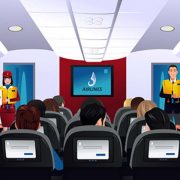 Secure yourself when the seatbelt sign is on
0 replies

Cups in the cabin for takeoff